← more from
Arbutus Records
Get fresh music recommendations delivered to your inbox every Friday.
We've updated our Terms of Use. You can review the changes here. 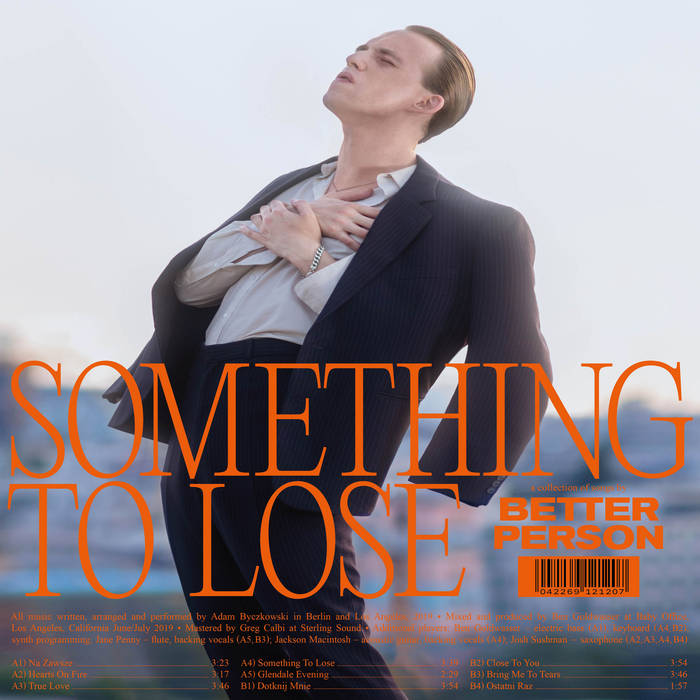 Li Sakurazukamori So smooth, makes me feel like i'm floating Favorite track: Something to Lose.

stephan_m Normally this is not my favourite music, but i need it in these dark days.

Soulcat I fell in love from the first note <3

Frant Dunlané Just brilliant. A masterpiece of an album that fills me with the joy I need in my life right now. Thank you Better Person.

rookiespence I love your voice! Every track on this album is great but Dotknij Mnie is sublime. I only speak the smallest bit of Polish but it doesn't matter because this song just proves again that music is universal. Favorite track: Dotknij Mnie.

Better Person is the moniker of Berlin-based Polish singer and balladeer Adam Byczkowski. After his 2016 EP It’s Only You captured the sound of late night intoxication and devastated croons to an empty dance floor, the singer toured relentlessly, traveling all over Europe, North America and Asia, moving and living in Montreal, Los Angeles and returning, time and time again, to Berlin. Somewhere in between these divergent cities he fell in love, and this love would become the centerpiece and inspiration for his long-awaited debut album.

The young Polish singer traveled to California after a chance meeting with MGMT’s Ben Goldwasser at a Berlin after hours club. An introduction by a mutual friend turned into a night-long conversation about shared influences. A fortuitous increase to Byczkowski’s overdraft by an online banking app (which ended in tragedy months later) culminated in a relocation to Los Angeles, to complete his debut album with help of the producer. Goldwasser’s obsession with synth programming and acumen for generation-defining pop hooks underlines the strength of Better Person’s deeply personal songwriting. The result is an expansion of Better Person’s inner world, without sacrificing any of its enigma.

Something to Lose is the culmination of Better Person’s desire to nurture intimacy through tender balladry. An intriguing combination of forgotten euro-pop tropes with an elegant sophisti-pop palette provides the backdrop upon which his supple and detailed vocal delivery thrives. While ‘Dotknij Mnie’, sung entirely in Polish, is a nod to the dark and gothic mood Better Person is known for, the title track ‘Something to Lose’ departs towards a decidedly sunnier atmosphere. Byczkowski sings gently over his signature combination of FM synths and drum machines, this time lightly decorated with acoustic guitar strums, congas and layered vocal harmonies to lighten the arrangement, transporting the sound towards yacht-rock territory, undoubtedly influenced by his Los Angeles environment, a city famous for imparting its golden hues onto the music made there.

Though Something to Lose is a celebration of love, the refreshing honesty and self-effacement that Better Person fans are familiar with is still at the heart of its lyrics. Byczkowski may be a dreamer but he has no delusions about the real world. The album is a proclamation of a newfound devotion, but also the fear of loss that comes with it. It is not simply about love, but the bitter-sweetness of life, the fear and darkness that underscores even the most euphoric moment.

The album’s journey ends with Ostatni Raz, a slow dance between nylon-string guitars and a soaring saxophone floating over the calming sounds of crashing waves and slick fretless bass. The soothing elements of the final track are a summary of the album itself: an overtly breezy sonic landscape as heartfelt, sincere and evocative as it is polished and refined. When the last notes drift away in reverb you can almost smell the ocean air.

All music written, arranged and performed
by Adam Byczkowski
In Berlin and Los Angeles, 2019

For Jane, my true love.

Better Person is the musical project of Adam Byczkowski, a Berlin-based singer and ballad composer

Bandcamp Daily  your guide to the world of Bandcamp

Alex Rita and Errol from Touching Bass feature in our special London edition of the Bandcamp Weekly.